Love spicy foods? Consider growing your own peppers at home. While countless varieties of peppers and chiles exist across the globe, in recent years the trend can be summed up by “the hotter the better.” As farmers around the world race to raise ever spicier chiles, home gardeners are returning to heirloom varieties like the scotch bonnet pepper. Scotch bonnets, actually a chile, will grow in any warm climate and chefs love their wonderful flavor in addition to the incredible heat. Scotch Bonnet peppers are among the hottest peppers, measuring 80,000-260,000 Scoville units, a measure of pepper heat, according to the Iowa State Extension Service. 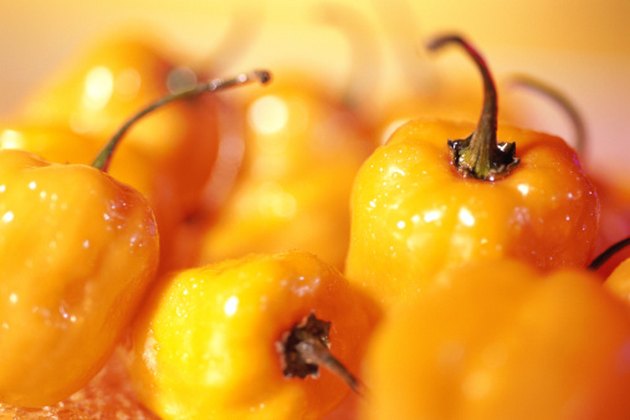 Prepare the soil in a sunny location into rows. Scotch bonnet peppers need a rich, sandy loam to properly grow. Too much standing water will cause root rot and other diseases, so insure proper drainage prior to planting. Mix into the soil a fertilizer rich in nitrogen and phosphorous to ensure a vigorous start.

Sow the seeds when soil temperatures have reached at least 65 degrees Fahrenheit. Place a few seeds at a time into rows ¾ to 1 inch below the surface of the soil.

Water once daily to keep soil moist but not wet. Germination typically occurs within the first two weeks. After the peppers have sprouted, reduce watering to once per week.

Thin the seedlings when they have a second set of leaves above their initial seed leaves. Remove all but the strongest seedling in each bunch, thinning the plants to every 10 to 12 inches.

Weed your rows of peppers regularly to ensure that your peppers receive all the nutrients and water they need. Peppers have shallow root systems, and obtain up to 80 percent of their moisture and nutrients from the first 1 foot of soil.

Protect your Scotch bonnet peppers from insects and disease with liquid copper fungicide and pesticides applied on a regular basis every few months.

Harvest your peppers carefully. Many people wear rubber gloves when harvesting hot peppers like scotch bonnets as they have extremely potent oils present on the skin of the pepper. Scotch bonnet peppers mature approximately 60 days after flowering.