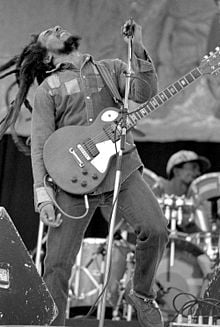 Robert Nesta “Bob” Marley, OM was a Jamaican reggae singer, song writer, musician, and guitarist who achieved international fame and acclaim. Starting out in 1963 with the group The Wailers, he forged a distinctive songwriting and vocal style that would later resonate with audiences worldwide. The Wailers would go on to release some of the earliest reggae records with producer Lee Scratch Perry. After the Wailers disbanded in 1974, Marley pursued a solo career that culminated in the release of the album Exodus in 1977, which established his worldwide reputation and produced his status as one of the world’s best-selling artists of all time, with sales of more than 75 million records. He was a committed Rastafari who infused his music with a sense of spirituality… (wikipedia)

The greatness of a man is not in how much wealth he acquires, but in his integrity and his ability to affect those around him positively.One good thing about music, when it hits you, you feel no pain.If you’re white and you’re wrong, then you’re wrong; if you’re black and you’re wrong, you’re wrong. People are people. Black, blue, pink, green – God make no rules about color; only society make rules where my people suffer, and that why we must have redemption and redemption now.I’ve been here before and will come again, but I’m not going this trip through.Don’t gain the world and lose your soul; wisdom is better than silver or gold.